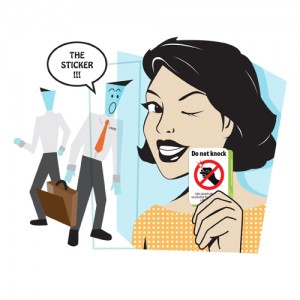 The Consumer Action Law Centre has welcomed the proceedings initiated by the Australian Competition and Consumer Commission against three energy retailers and their marketing companies in relation to door-to-door selling practices. Among other things, the case will seek clarification on whether a Do Not Knock sticker amounts to a request for salespeople to leave under the Australian Consumer Law.

‘Many consumers have complained to us and regulators about door-to-door sales practices. This action by the ACCC is a demonstration those complaints have been heard,’  said Gerard Brody, Director of Policy and Campaigns.

Following the public announcement of these proceedings, the Consumer Action Law Centre has provided the Australian Competition and Consumer Commission (ACCC) with further evidence of ongoing unlawful door-to-door sales practices, in a bulk complaint dominated by retail energy providers. Complaints have been sourced from across Australia via the Do Not Knock website www.donotknock.org.au.

‘It’s not just questionable sales practices that people are complaining about. Many of the complaints indicate breaches of the Australian Consumer Law, for example misleading consumers about the nature of the visit, not leaving the premises immediately when asked, and refusing to provide details of the salesperson’s identity,’ said Mr Brody.

Specific claims made in the complaints include:

‘It does not surprise us that energy providers are by far the most complained about sector as they are presently users of door to door marketing on a large scale” continued Mr Brody.  “But the action taken by the ACCC against energy retailers and their marketers should send a message about acceptable conduct to other companies that use door-to-door sales too.’

Consumers that have complaints with door-to-door salespeople are encouraged to provide details at the website www.donotknock.org.au.

To view a PDF of the media release please click: Consumer Action welcomes clarification of legal position of Do Not Knock sticker.