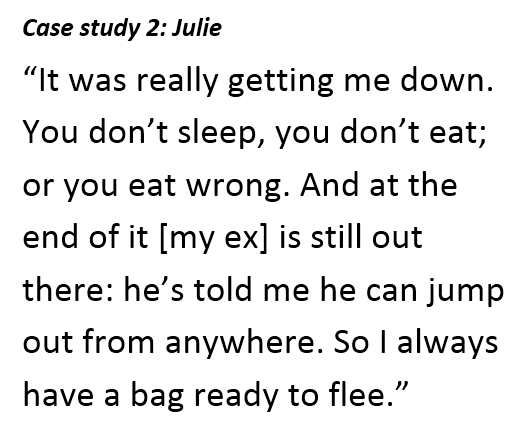 Julie is 48 years old and lives alone in a public housing unit. In the past Julie has struggled with alcohol addiction, and has recently escaped a violent partner. She suffers from post-traumatic stress disorder (PTSD) and osteoporosis, and is recovering from a severe ankle injury that restricts her mobility. Julie’s gas supply was disconnected for about two weeks at the end of 2014. Around that time Julie was supporting a friend, who slept on her couch and cost her a lot of money. Her car was then struck by another car, creating extra costs.

Unable to work because of her injury, Julie fell behind on her bills. AGL, her gas retailer, threatened her with disconnection. Until this point Julie had paid her bills by automatic direct debit, and says she was often ahead in her payments.

As her debt grew into the thousands, Julie began receiving final notices. She lived on $93 per week after rent and other bills, and of that $60 went to her AGL payment. Julie asked AGL repeatedly for an extension, but she says they refused. They told her she could either pay in full, or accept a plan that was too much for her to afford. Julie says AGL staff were generally unsympathetic, and recounts one particular example:

“The [AGL] fellow was very rude, very unhelpful. It was a bit like taking advantage of a female going into a motor mechanics: ‘right, we got one here’. That’s how I felt. I hung up on him in the end, burst into tears; he could hear I was getting very anxious but he just kept saying the same thing over and over again.”

Eventually AGL disconnected Julie’s gas supply, meaning she couldn’t use her stove or hot water. Julie boiled water in the kettle to cook instant meals, and used a bucket to wash. Eventually Julie came across a financial counselling service, which she says helped her immensely.

“The financial counsellor put my life back in order… I could almost cry now just talking about him; he’s such a terrific bloke.”

The counsellor advised Julie to call EWOV and stop speaking to AGL. He and EWOV then negotiated with AGL on Julie’s behalf and her gas was reconnected a day or two later. They also discovered that Julie wasn’t receiving the concessions she was eligible for. Meanwhile, disconnection and reconnection fees increased her debt.

Julie says her financial situation and the disconnection have caused her significant emotional distress, which comes on top of the trauma of her domestic violence situation. Julie can recall a time when life felt more hopeful: she owned her own home and practiced as a health therapist. She lost the house when her marriage broke down and things have spiralled downwards since then. Julie is trying to get her life back on track and recover from her experiences, but she still lives with the threat of violence and struggles with PTSD symptoms. Julie gave this advice for energy companies dealing with people in her situation:

“I’d say, first, get somebody who has a compassionate voice and is genuinely there to help them. There’s a handful of people that are just being buggers, but the majority of people want to pay their bills: they’re just battling to get that much money.”